What a month May was! So hectic, in fact, that we never had the time to write the April addition of Willdife Camp’s newsletter. But now we’re back with lots of stories to tell.

May started off with the annual guide’s exams and Indaba soon followed. The bushcamp had to be put up and we rushed to get one of two extra en-suite tents up before June arrived. And in among all that, we still had a camp full of happy guests, and on one or two occasions a camp full of lions. It was month to remember – a month in which many new campfire stories were born… 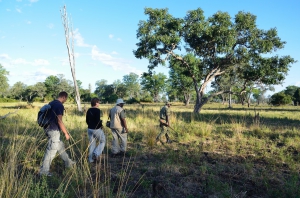 The annual guiding exams were held early May with Joseph (trying to qualify as a walking safari guide) and Joel lining up to do their theory exams. The new addition to Wildlife Camp’s guiding team, Moses Mwanza, did his practical walking safari exams. In case you missed the March addition of Wildlife Camp’s newsletter, the guiding exams for South Luangwa National Park is a grueling affair. When all was said and done, slightly less than one out of three candidates successfully completed their exams. Joseph and Joel both missed the cut-off mark for the theory exam but we are happy to announce that Moses passed his practical exam with flying colours and will soon be a fully qualified walking safari guide. The low pass-rate, from a tourist’s point of few, is a very good thing. It proves that the guiding in South Luangwa National Park will remain at its current high standard for years to come.

We don’t have a Dalmatian.

Living in the bush, you experience many situations that has the potential to become great campfire stories in the future. I like telling the story about the guests that complained (profusely I might add) about the hippo noises at night. 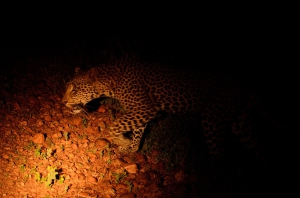 I remember the time I got angry at my wife for snoring (something she never does) only to find out that there was a porcupine making strange noises right outside my bedroom window.

The story about the guests who arrived one night late and enquired the next morning where the big Dalmatian was that they saw in the parking area the night before jumps to mind. Much to their surprise we told them that we don’t have a Dalmatian (there is only other type of large spotted mammal that I know of in this area, and it’s definitely not a Dalmatian.) The month of May provided us with a couple of extra campfire stories.

One early evening Herman heard the loud noise of a motorcycle outside his house. In general, it’s not the best idea to drive into camp on a motorcycle – at night, its utter madness. In any case, Herman went out and asked the rider “Are you lost” at which the Canadian motorcyclist replied “No, I’m scared.” 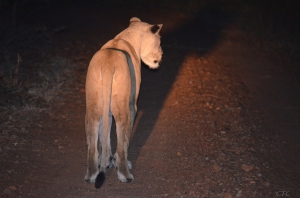 While on his way into camp he drove into a pride of lion. It was his first time in Africa, his first time ever to see a lion in the wild and there he was, with only his riding skills to protect him… Herman offered to escourt him to the reception with his pick-up, and the plan was that the motorcycle will follow close behind. When they came across the lions again Herman looked around but only saw a deserted motorcycle on the road… The scared guest had had enough and was lying flat on his belly in the back of the pick-up, refusing to move a muscle.

That same night, the small pride moved through camp and even made themselves comfortable on the cool concrete verandah of chalet 3. But they soon moved off and we thought it would be the last we saw of them. Until the next day lunch time…

After lunch Wildlife Camp usually falls quiet for a couple of hours. Guests take afternoon naps, and even the animals take a break and lie down in the shade. 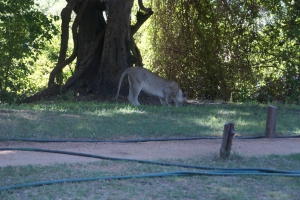 When Margo the gardener came running into the office with only one shoe on, I knew that a campfire story was brewing. Turns out that last night’s lions had killed a baby giraffe merely 100meters in front of the chalets and that one the females came into Margo’s garden to quench her thirst from the sprinklers. Margo, who admitted to also dozing off slightly, woke up when the baboons started running up the trees to get away from the big cat. He thought that it was probably time for him to make a quick escape as well, but in his haste only had time to put on one shoe…

And so, this day will always be remembered as the day Margo ran away from a lion with only one shoe. No gardeners were hurt during the writing of this newsletter.

My best sighting ever?

A campfire question I often get asked is about the “best sighting you’ve ever had in the Luangwa.” And it’s always been a very difficult question to answer, but I think I experienced my favourite of all time recently. Once again, this lions take center stage… 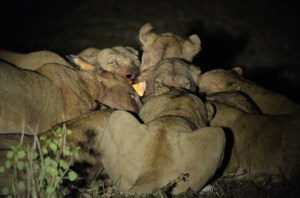 Out in the park with guests, we came across a pride of lions – 23 of them all together! Usually, that would a highlight in itself. The cubs were playing and irritating the sleeping females to the best of their abilities. One female was suckling her cubs and one of the young males was fascinated by the hooded vultures swooping down to eat his fresh droppings. Who wouldn’t be fascinated?

Suddenly, in the distance, we heard the unmistakable sound of a puku in distress. Before my mind even registered what was going on, all 23 lions were up and in action mode. They heard a dinner-bell ring and they were not going to pass on a free meal.

With the help of my excllent spotter, I was able to get to the scene-of-the-crime before they did – a leopard was trying to hold down 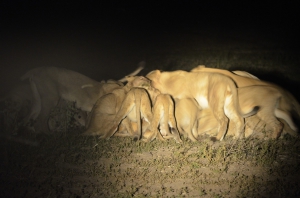 her fully-grown puku prey but soon realized that the lions were closing in very quickly. It took the lions an impressively short time to locate where exactly the ruckus was coming from and it took the leopard even shorter to realize that she had gone through all the trouble of hunting down a puku only to feed a pride of hungry lions. She waited until the last moment, but as soon as she decided to run she was gone in a flash. The puku, still half alive, got up to escape, but was brought down once again, this time by three lionesses. Poor puku – being killed twice in one night can’t be much fun!

The feast that ensued was a sensory overload – the sight of all those lions ripping apart the leopard’s prey. The smell of fresh blood so vivid you could almost taste it. The sound of them growling and hissing at each other in order to get the best bits – in the distance, the giggling call of excited hyena. It was a truly amazing sight on so many levels!

On that high note, it’s time to end off this month’s newsletter. The peak season is upon us and if you’d like to come and experience your own campfire stories, send us an e-mail at info@wildlifezambia.com