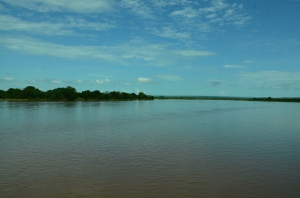 March and April is always an exciting time in the Luangwa Valley. It marks the end of a green season in which we measured 731mm of rain here at Wildlife Camp. Slowly but surely the seasonal camps start opening up and it’s always great to see all the familiar faces back in the bush. But most importantly, it’s that time of year when future guides prepare for the grueling exam that awaits them at the end of April. It’s not an exam to be taken lightly and the Luangwa Safari Association is in some odd way proud of the low pass mark of this exam – it means that the bar is set high and the standard of guiding in South Luangwa National Park will remain as some of the highest in Africa!

From Wildlife Camp, Joseph (BJ) Zulu is sitting for his walking license – he has been a driving guide for the past four years and is now aiming for the highest honours among Zambian guides. Long-term Wildlife Camp employee Joel Njobvu is aiming to go from head-barman to driving safari guide and can be seen walking around camp with his guide’s manual under his arm all day long – in fact, I think he sleeps with it under his pillow! But all the hard work is not for nothing – even some of the most obvious features in the bush has a story behind them – and future guides need to know and understand these stories.

Termites. We’ve all heard of them, most of us have seen them, but very few of us know how fascinating they are! Fungus-growing termites (macrotermites) are the ones that build those massive mud mounds scattered all over Southern Africa. They produce a certain type of fungus within these nests which allow them to process cellulose without a gut-parasite commonly found in other primitive species. But did you know that within these mounds, magic happens? You see, just like people, termites prefer their homes air-conditioned. The mounds inside consists thousand of small tunnels, a central chimney, a food store, a royal cell, fungus combs and a nest chamber. It’s inhabited by a single queen, a slightly smaller king to fertilize her, workers to do all the daily jobs that termites need done and soldiers to protect the nest. Seeing as the queen can lay 25 000 eggs each day and live for up to 20 years, you can imagine that millions of termites live together in one such mound. 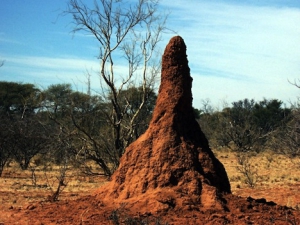 Air in the nest chamber, heated and depleted of oxygen from all the various activities that take place, rises up through the central chimney and into ventilation flues, just below the mound’s surface. Here, a carbon dioxide and oxygen exchange takes place and the air cools. Heat flowing from below pressurizes this air and the cooled down, oxygen-rich air follows another passageway into a cavity below the nest chamber, passing though specially constructed veins kept damp by the worker termites. This cools the air further, before it rises up again into the nest chamber. Amazing, isn’t it! And other animals think so too! Monitor Lizards (Varanus niloticus) are known to lay their eggs inside these mounds to ensure a constant incubation temprature. Baboons often use these nests as lookouts. And speaking of baboons… 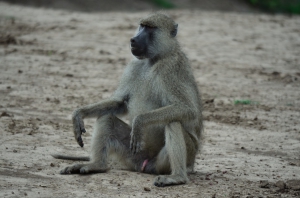 The Yellow Baboon (Papio cenocephalus), locally known as Bongwe, is another very common animal both here around Wildlife Camp and in the park. Facial expressions are one of the most important communication tools used by baboons and is often a vital measure to deter agonistic interactions involving physical fighting, especially among males. Baboons use highly ritualized signals which communicate threat without escalating to physical fighting. These include, but is not limited to, intense staring, eyelid displays where one male blinks slowly, exposing his whitish eyelids to his potential competitor, ground slapping, audible chewing or teeth grinding and yawning. But they also have friendly displays such as lipsmacking, grinning, looking over one shoulder, presenting any body part for grooming, and ear-flattening.

Yellow baboons live in multi-male/multi-female groups in which the females remain in their natal troops for their entire lives and males emigrate into a new social group to breed when they reach adult size at about 8 years of age. Within any troop, clear dominance hierarchies exist, with young female baboons inheriting the rank of their mothers. Females reach reproductive maturity around 4 years and the gestation period is 180days at an average interbirth interval of 1.78 years. They eat almost anything, from insects to small vertebrates and fruits and seeds from various trees, like the Sausage tree.

The Sausage Tree, (Kigelia Africana) is known as Muvungula locally. These beautiful deciduous trees bear a sausage shaped fruit that weighs up to 10kg and is sought after by many animals including baboons, elephant (Loxodonta africana), hippo (Hippopotamus amphibious), crawshay’s zebra (Equus quagga crawshayi) and porcupines (Hystrix africaeaustralis). The flowers are also very popular among the animals of the Luangwa Valley is usually borne August and September. 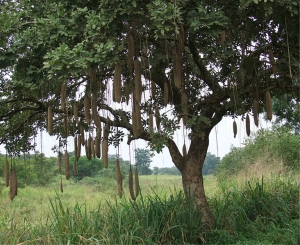 Locally, the fruit is sometimes baked to ferment beer or boiled to produce a red dye. Powdered fruit is used to treat ulcers and sores while the fresh fruit is believed to be a remedy for warts and skin cancer. There is, however, a little bit of logic behind this thinking, as a balm called Kigelia Cream is made from the famous fruit and endorsed by various “Western Doctors.” It is used for the treatment of sunburn, solar keratosis, skin pigmentation and even certain types of cancers in its early stages. The flowers are popular among a variety of birds, including the Grey-Go-Away-Bird, who eats the flower buds. 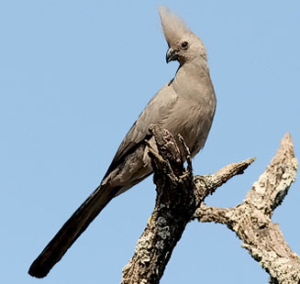 The Grey-Go-Away-Bird (Corythaixoides concolor) is also known by various other names including Grey-Loerie and in Afrikaans the Kwêvoël. Locally it is called Nduwaluwa and is often found in savanna woodland. They are clumsy fliers and often glide from the top of one tree to the bottom branches of another, walking back up to the top while feeding on fruit, flowers, buds, leaves, nectar and insects as they go along. They also practice geophagia – eating soil for nutrients lacking in their diet.

New research tells us that these birds may be facultative cooperative breeders, with as many as 6 adults seen to attend one nest. During courtship, males will often present females with gifts such as fruits and flower-petals to eat. Incubation starts prior to clutch completion, resulting in asynchronous hatching. 4-eggs are usually laid and the chicks are semi-precocial. The male will share incubation duties with the female.
The name of this species is derived from its call, a drawn-out nasal “go-way” to warn of danger. They are quite brave birds and will mob potential predators like owls.

So, there you go – a quick glimpse into the brains of future guides of South Luangwa National Park. I know I had to do a fair bit of googling to get my facts straight for this newsletter! Unfortunately “google” is not allowed during exam-sittings! 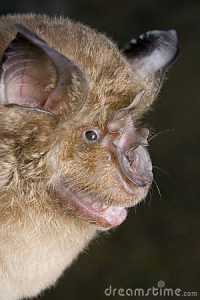 There are just under 500 species of birds recorded in South Luangwa National Park, 1094 species of vegetation, more than 100 species of mammals (more than half of that made up of bats and rodents) and thousands of insect species. Yes, the guides only has to know the important ones – nobody has ever asked about the gestation period of Geoffroy’s Horseshoe Bat (Rhinolophus clivosus) or the lifespan of the Fat Mouse (Steatomus pratensis). But even then, it’s a daunting task and we wish all the students the best of luck with the upcoming exams!

And that is that for this edition of Wildlife Camp’s newsletter. Herman and I will be at Indaba in Durban during May – please e-mail me at conradtcooke@wildlifezambia.com to set up an appointment. 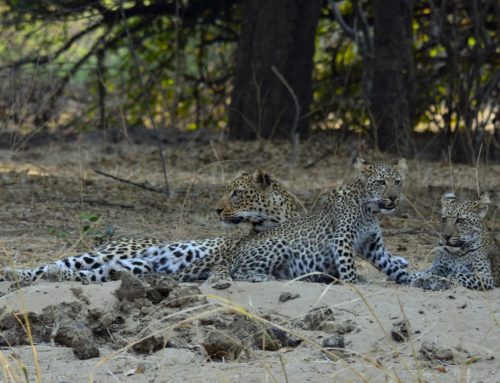 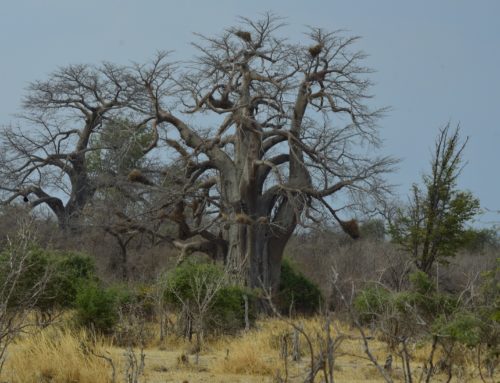 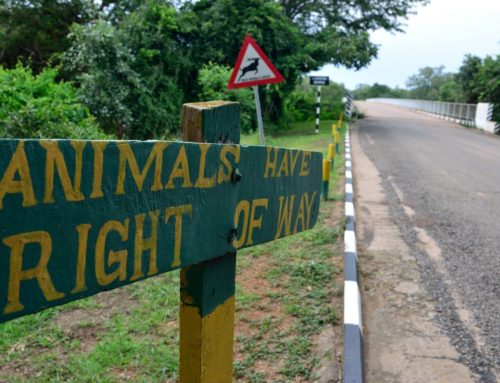 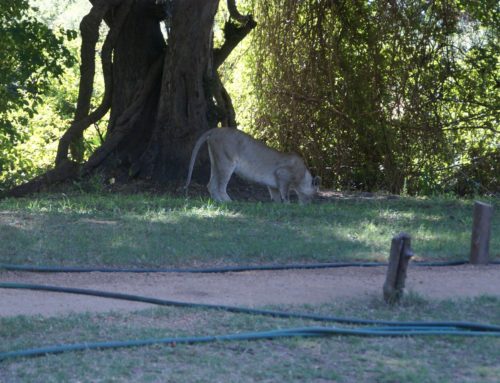